Jackals Fall To Hurricane On Road 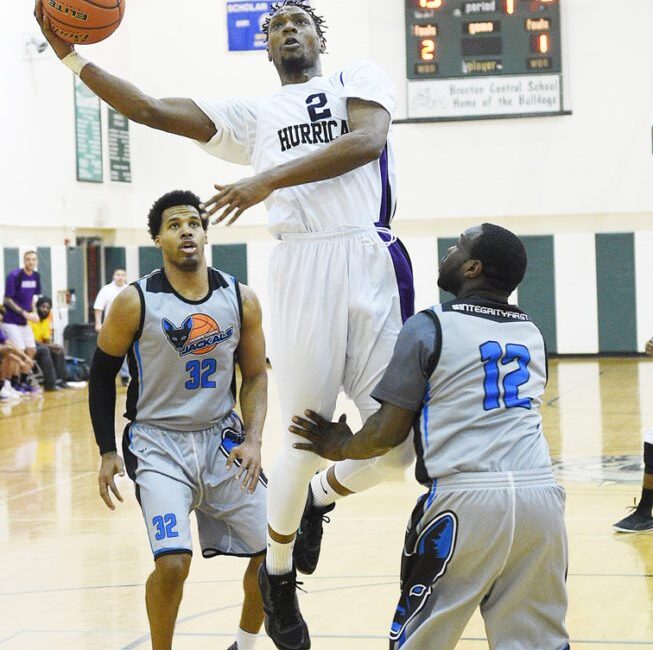 BROCTON — In a game as important as any all season, the Chautauqua Hurricane came through with its best performance of the season.

The Hurricane (6-3, 5-0 at home) led early on, jumping out to a 19-11 lead after a dunk by Marcus Feagin capped off seven straight points of his own. Chautauqua finished the first quarter with a 26-17 advantage over the rival Jackals, a team that Chautauqua fell to in both previous matchups on the season.

Chautauqua pulled away even more at the beginning of the second quarter, taking a 42-27 lead on a 3-pointer from Reuel Moore. Jamestown answered, however, with a 13-2 run to cut the Hurricane lead to only four points, 44-40, with just over a minute remaining in the first half.

Isaiah Jefferson gave the Hurricane a cushion heading into the break, with five straight points, capped off by a trey from the corner. The Hurricane held a 49-40 lead at the break.

In the second half, one of Jamestown’s key players — Michael Davenport — finally began to make an impact. The former St. Bonaventure University player got hot in the third quarter, scoring 12 points in the frame for Jamestown. Still, the Jackals trailed heading to the fourth, 82-71. Jamestown’s Ralph Williams tallied 10 points in the period.

Although Chautauqua held a double-digit lead, the fourth quarter was anything but easy. Jamestown roared back with 20 of the first 29 points in the period, capped off by three straight buckets from Xavier Churnac, to tie the game at 91 apiece with exactly five minutes remaining.

“We had to refocus,” said Chautauqua Hurricane coach Jerome Moss. “Last year, we had the same thing, and they came back and got us at the buzzer. Some of these guys were on that team, and they said ‘not again.’”

That final stretch was set up for a thrilling ending, and the two teams did not disappoint.

Chautauqua had back-to-back baskets to take a 95-91 lead. Churnac answered with another bucket, making the score 95-93.

Next, the two teams traded 3-pointers. Chautauqua’s Jonny Marsh drilled a trey to go up 98-93, but Jamestown’s Maceo Wofford answered to send it back to a two-point game.

With well under a minute to go, Chautauqua looked for its point guard — Williams — once again. He delivered with a contested shot with one foot inside the 3-point line to put Chautauqua ahead by four, 100-96, with less than 30 seconds remaining in the game. Williams turned to the crowd after drilling the shot and was met with thunderous applause.

Jamestown came right back, however, with a 3-pointer to cut the Chautauqua lead to only one with 10.4 seconds left.

Then, after an inbounds pass, Feagin leaked out from the defense and finished with a breakaway slam with only 2.2 seconds left, giving the Hurricane a three-point lead with one last possession in regulation.

The Jackals got the ball in the hands of Davenport for the final shot — a deep three at the top of the key — but it just fell short. The home crowd rushed the court to celebrate the biggest win of the year for the Chautauqua Hurricane.

“I know the guys really wanted this game,” said Moss. “They put everything they had into it.”

Davenport, who Moss singled out as a key player to watch for in Friday’s game, finished with 21 points on the night, with 12 coming in the third quarter.

“We switched guys on him,” said Moss. “We had three different guys guard him tonight. We wanted to keep throwing different people at him … and I think that confused him a little bit. … But he figured it out in the third quarter.”

The Hurricane were led by Williams’ 28 points and 11 assists, along with eight steals and six rebounds. Feagin finished with 21 points and 16 rebounds, while Marsh added 22 points and three assists.

“Ralph (Williams) was definitely on tonight,” said Moss. “He definitely ran it for us.”

“Marcus is our steady guy,” added Moss. “He plays well every night and gives it all.”

The victory is even sweeter for Chautauqua, which not only took down the top team in the Northeast Conference, but also claim a share of first place with the win.

“It was an exciting game,” said Moss. “Thanks to all the fans that came out and got a chance to see it. Now you see we play some exciting basketball.”